Alvin Dell Comic 23 is the twenty-third comic issue in the 28 comic Alvin 1962-1973 Dell Comics series and was originally sold for 15 cents.

Dave arrives home with camping equipment informing the boys they're going to live in the woods for a couple days. They set up their tents before visiting the nearby stream to fish. Dave admires a rock just as Alvin proclaims he's got a bite (really Dave's pants) and Simon and Theodore reel in one each. Theodore's is too small and ends up in Dave's boot causing the eldest Seville to fall into the cold water. They enjoy the campfire as bedtime approaches. During the night a bear visits Dave, who mistakes the large creature as Alvin, and when it's confirmed Alvin's not in his tent, Dave and the boys run to the car leaving in terror. 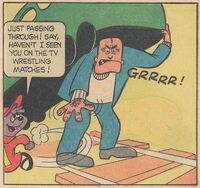 Dave calls Alvin so they can meet up for some lunch after shopping. Alvin boards a subway and falls asleep. Suddenly he's startled by Subway Sidney, the underground ogre, and desperately tries to evade his grasp. He alludes Sidney, but on the way to the street, Alvin finds himself where all the lost subway boys end up, counting tokens. The red-clad chipmunk riles up the boys to fight for their freedom. During the escape, Alvin sets loose a mouse up Sidney's pants for the giant's foot blocked the exit. As Alvin thinks he's a goner, he ends up punching the conductor, who trying to wake him and happens to be named Sidney as well. 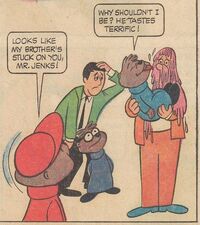 The brothers feel glum because of the rain outside so Dave suggests they visit the factory of Jenk's Juicy Candies. When they arrive, Mr. Jenks shows the Sevilles the chocolate coating room filled with tanks of liquid chocolate. When Alvin bends down for a closer look, he falls in, ruining the vat. They move to the taffy-pulling machine and Theodore, unable to resist, finds himself stuck in the sticky candy. He breaks free, coating Mr. Jenks in the process. The owner regrets inviting them until Simon offers advice for increasing production. Seeing as the chocolate couldn't be used to make individual candies, one large chocolate bar was made and delivered to the boys. 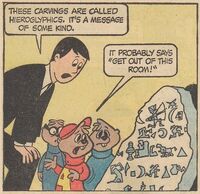 Dave explains to The Chipmunks that they can learn about history and art at the museum; inside they look at Medieval armor and a dinosaur skeleton before Alvin disappears. Ordered to get off the second story, Alvin slides down the skeleton's spine causing it to break into a heap of bones. One of the museum staff confesses the bones were held together with airplane glue and the group moves into the Egyptian Room. Theodore expresses his fright of mummies before noticing one is missing from its tomb. Meanwhile, a couple guys carry the mummy until they break for coffee. Ready to leave, the Sevilles spot the mummy standing up and knock over the dinosaur again in their haste to get away from it. 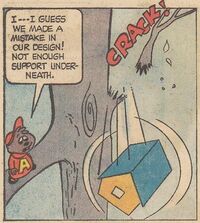 Seeing the boys lying in the grass, Dave instructs them to build something so Alvin offers up the idea of a tree house. The brothers gather tools and disassemble Dave's workbench for the wood while their guardian takes a trip downtown. In the backyard, Alvin hoists up the lumber to build a working foundation and within no time they have a completed structure, minus the furniture. Despite Simon's plea, Alvin insists on using all of Dave's new furniture, with the exception of the couch. Alvin shows off the structure to Dave, who's furious, as the supporting branch gives way causing the tree house and new furniture to crash to the ground.