Alvin Dell Comic 2 is the second comic issue in the 28 comic Alvin 1962-1973 Dell Comics series and was originally sold for 12 cents.

A couple Ace Movers carry a heavy bureau into the garage to Dave's delight. The Chipmunks want to fix something with their new Do-It-Yourself kits so they work on the bureau as Dave listens outside smiling only for that smile to change to horror as he learns they destroyed the $250 antique.

Dave takes the boys to his friend Eddie's farm. Eddie shows the three chipmunks around and gives Theodore the task of gathering chicken eggs, Simon collecting a pail of milk, and Alvin feeding the pigs. Eddie compliments Dave on his boys as Dave enjoys the silent just as they are interrupted by a ruckus. They investigate to find Theodore frying the eggs, Simon standing next to 15 buckets of milk, and Alvin riding one of the pigs. Dave takes Eddie to rest while the boys go for a walk in the corn. Alvin comes up with an idea to cheer them up though ends up terrifying them. In the morning, Theodore throws a shoe out the window to quiet the rooster only to hit the fox that was stealing the farmer's hens.

Alvin and the Burglars - 4 pages 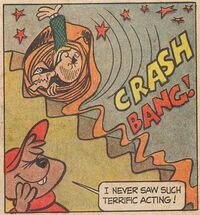 Dave has business to take care of and informs the boys two TV actors may be waiting at home. They open the front door to discover two men robbing their house. Believing they're actors, Theodore, acting too, tells them to "stick 'em up" only for Rocco to pull out his gun and shoot at them. Alvin suggests a game of Cops and Robbers so the two "actors" hid upstairs. The Chipmunks trick them into thinking they've left the house in order to roll the crooks up to be arrested. Turns out the boys knew Louise and Rocco were robbers the whole time but needed to be good actors in order to fool them. 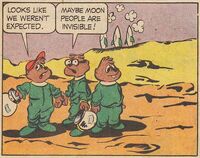 Seeing as the boys have been good, Dave gives them toy rockets to play with until they're exhausted enough to take a nap. The Chipmunks discover their rockets are life-sized when they awake and blast off into space, orbiting the Earth a few times, on a journey to the moon. The brothers touch down onto a moon made of cheese, frightened by the "man in the moon." Mr. Moon (Dave) informed the trio of a cheese landslide blocking the road between his castle and Moontown though Theodore quickly decides they should eat it. To thank them for saving the moon, Mr. Moon agrees to make the next group of men welcome. Back on Earth, Dave breaks the news that they were dreaming only for him to get burned by a hot rocket. 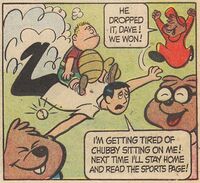 The Chipmunks desire to play baseball and Dave asks to be the umpire though the brothers don't believe he's young enough for the game. At the field, Dave calls a strike, leading to a confrontation with Chubby, and a near collision of a hit ball aimed directly at him. Dave is trampled at a base with Theodore so he's made a centerfielder to stay safe. Following a catch, Dave is up to the plate, barely hits the ball, and is lucky enough to make it home, winning the game, due to Chubby overthrowing and dropping the ball. 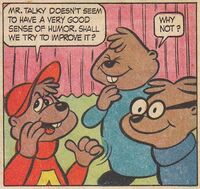 Dave notifies The Chipmunks of a TV appearance on Celebrity Interview before reminding them of their importance. The boys meet Walker Talky, the Master of Ceremonies, and decide they need to improve his sense of humor: Theodore hangs from a light and Simon dismantles the control room to make a joke. During the rehearsal, the Sevilles perform a song for the show only for Theodore to disappear again at the end. They find him eating the prop cake for Crummy Cakes, becoming the sponsor's message. The brothers try to stay out of trouble, only to hit Mr. Talky with a mic and jump rope with a camera cable. Almost at broadcast, Simon saves the show by plugging in the control room.

Dave takes a fifth call for Joe's Sandwich Shop so he sets out to complain to the telephone company. Alvin comes up with the idea to open up Alvin's Sandwich Shop considering people keep calling them, to Dave's shock.

A Day at the Farm

Alvin and the Burglars