Alvin and the Chipmunks Wiki
Register
Don't have an account?
Sign In
Advertisement
in: Comics, Dell Comics, Alvin Dell Comics

Alvin Dell Comic 1 is the first comic issue in the 28 comic Alvin 1962-1973 Dell Comics series and was originally sold for 12 cents.

A Trip to Chinatown - 1 page

Dave and The Chipmunks take a trip into Chinatown though Alvin wonders why the people aren't wearing real Chinese clothes. While his family prepare to eat at a restaurant, Alvin tries on some Chinese clothes.

Alvin brings home a chemistry set ready to experiment. Dave discovers the set only to be persuaded by Alvin that it's completely harmless and educational. Following Dave's exit, Alvin combines his new equipment with his closet full of scientific devices. Unsure of what he's doing, an explosion occurs and a piece of ice is created. Actually ready for his great experiment, the red-clad chipmunk straps Theodore to the table, gives him a drink, and ends up flying over town. They fly next to Dave's office window before heading home to clean up just in time for a bewildered Dave to arrive. 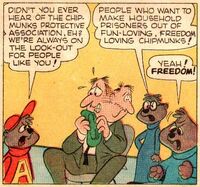 Alvin reasons to Dave that a pet could give them a responsibility and the boys set out to get one. They browse the pet shop before hearing a man asking about chipmunks. They angrily confront the man for wanting to make a household prisoner out of one of their kind. Theodore accidentally opens a monkey cage leading to the other animals escaping and the boys sneak out. Dave learns of an elephant on the loose and is angered to learn Alvin brought it home.

A Day in the Country - 8 pages 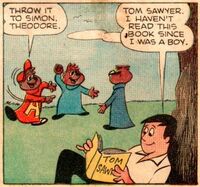 Dave and the boys drive out to the country for a picnic. After they eat, the boys play ball and Dave decides to read Simon's book, Tom Sawyer, before drifting off to sleep. Not wanting to wake him, the brothers move to a nearby field where Theodore overthrows the ball causing it to bounce to the opening of a cave. Alvin suggests they take a peek inside where they travel in the dark until Theodore unexpectedly falls. His brothers struggle to pull him up with their belts and set out to leave the cave. The boys are confronted by Injun Moe in Dave's nightmare of falling due to being hit by Alvin's ball. 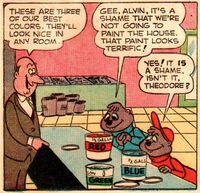 Dave wraps up plans with a painter to repaint the interior of the house. Alvin volunteers him and his brothers to save Dave money though Dave doesn't believe they're old or experienced enough for the job. Theodore supports Alvin's desire, and Alvin, wanting to surprise Dave and Simon with his skill, grabs Theodore to check out paints at the hardware store. Dave is awakened to strange noises the next morning so he investigates only to tumble down the stairs, due to paint cans, and discover Alvin and Theodore painting. 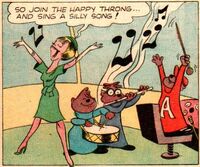 The Sevilles prepare to pick up Marsha Marsh, a big singing star, from the airport for a recording session. Dave asks the boys to stay put at an observation window, but Simon's thirst for knowledge leads them into Marsha's plane where The Chipmunks welcome her with their musical piece entitled "The Marsha Marsh March!" During the performance, Alvin accidentally powers on the plane and takes the cockpit as Dave frets in the control tower. To calm everyone down, Alvin starts singing, with his brothers and Marsha joining in. Marsha praises Alvin's bravery when they land and demands they record the rest of the album in the sky.

Seeing as Alvin spent all of his allowance, Alvin comes up with the idea to sell apples to Dave to make the money to buy him a birthday present. Alvin confesses his intent though Dave makes him return the apples he took from a neighbor's yard. Needing a present, Alvin kept one to give to Dave.

Needing to get to a meeting, Dave attempts to fix a problem with his car. After some time and a Fix It Yourself manual, he's electrocuted and opts to ride on the handlebars on Alvin's bike.

A Trip to Chinatown

The Alvin Show - "Alvin the Scientist"

A Day in the Country