Alvin's Studio is an episode of The Alvin Show series.

Dave's ready to rehearse a new song but the boys aren't (Alvin's playing with a yo-yo, Simon's reading, and Theodore's playing with a parakeet (George)). When Dave walks out on his boys (to play golf) following a heated argument about their new song, Alvin takes over and he tries to have his brothers perform a different song. In doing so, he begins to sound like Dave. After some time arguing with each other and the neighbor about how to yell Alvin, a large group of people congregate outside the house. Dave arrives to the pleasure of the boys and they sing his song. 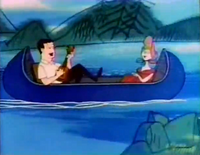 While Dave and his date Jeanie are out on the water in a canoe, The Chipmunks are spying on him unhappy with the lack of attention. They vow to end the romance so while Dave is singing the boys follow them on land. After they put their costumes on, the boys sing negatively about Jeanie. Dave becomes upset and capsizes the canoe. To teach the boys a lesson, he forces them to stare at the lyrics and sing the song 89 times.

​Dave introduces the new song but is interrupted when the band comes onstage. The brothers sing their part of the song but Dave's part is mostly muffled by the band that keeps moving across the stage. The boys begin marching around and by the end the band had picked Dave up, to his annoyance.

Clyde receives a phone call informing him of a request to give a speech to the National Association of Conglomerated Scientists. Once he arrives and enters the building, the guard changes the sign outside reading "Acme Broadcasting Company Studio D." Clyde begins his speech before a man interrupts and surprises him with the knowledge he's on This is Your Life. Clyde composes himself as the host starts with the inventor's biography. Following Clyde's birth and teachings, Clyde is instructed to listen to various voices: his fifth grade teacher (who mistakes the host as Clyde), football pal (who punches him in the nose), dog (who rips his pants), mother (really Leonardo's mother), and Leonardo.