Alvin's Cruise is an episode of The Alvin Show series.

Dave and The Chipmunks have just completed a very busy schedule and are looking forward to a peaceful cruise. While aboard the ocean liner, Alvin, who only wants to sleep, is constantly being annoyed by an obnoxious social director named Roger Marsell at every turn. Alvin finally gets back at the pest by having him step into a lifeboat and sending him into the sea. 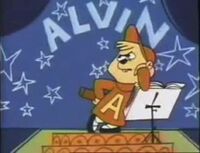 Dave's tired from the boys latest recording session and falls asleep. Dave, Simon, and Theodore prepare for another new song, but Alvin, like usual, has different ideas. His brothers sing the song while Alvin interrupts multiple times with his harmonica. Eventually, Dave lets Alvin play, resulting in him and his brothers goofing up the song. Dave finally wakes up. Nearly asleep again, he's jolted awake when Alvin blows the harmonica loudly.

Alvin and his brothers are in Fort Alvin spying on the enemy (Dave with recording tape). They wear French hats and carry swords. As them sing, they keep confronting Dave, blocking his way with their swords. After Theodore captures all the recording tape, he takes off running with Dave in pursuit. Dave then sneaks around recording them but is later tied up by Alvin and carried away by the boys.

Retrieved from "https://alvin.fandom.com/wiki/Alvin%27s_Cruise?oldid=82992"
Community content is available under CC-BY-SA unless otherwise noted.