List of Episodes
Alvin's Alter-Ego is an episode of The Alvin Show series.

Unwilling to do his chores or to rehearse their new song, Alvin is encouraged by his evil alter-ego to seek out the team's agent and work as a solo act. The evil conscience tells the boy of his future successes without the team. Then his good alter-ego points out how his father and brothers will struggle without him. Learning his lesson, Alvin returns home and he practices the new song and later cleans up the house. 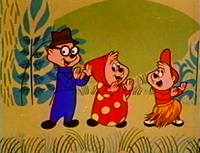 Dave and The Chipmunks take a trip to Hawaii, and after seeing the sights and getting friendly welcomings from the natives, the boys sneak away from Dave (Dave is tricked into thinking the boys are still there by a bird), before grouping together again to sing a Hawiian song about a heartbroken girl and her cheating boyfriend, while Alvin flirts with the hula dancers. Afterwards, the gang leaves Hawaii. 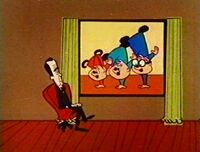 Dave and The Chipmunks take part in a television interview with a guy named Harry. After a brief introduction, Dave begins to read a couple fan letters. The second letter is from a girl named Mary asking what the boys liked to do in their spare time. They sing their answer nicely until right before the end of the interview where they sing what they like to do to get in trouble. 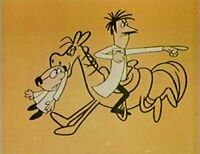 Clyde reveals his latest creation: the Beast of Burden. It takes a little editing to get the beast working correctly and Clyde names him "Automobile" (Leonardo convinces him to name the beast "Horse"). Clyde places a newly invented saddle on the horse and attempts to mount him. After a few tries he succeeds, and he creates the West, filled with clone-like people, for the horse to live. Seeking good and bad people in the West, Clyde creates the villain and guns while he intends to be the hero. Clyde, Leonardo, and the town pursue the villain but when they catch him, the town ties up Clyde and places him on some railroad tracks.