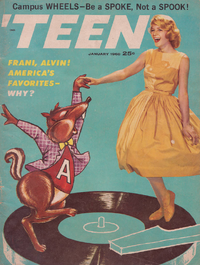 'Teen was an American lifestyle magazine for preteen and early teenage girls with a focus on entertainment, fashion, celebrity and real-life stories.

In January 1960, a magazine interview, by Johnny Jason, about Ross Bagdasarian, Sr. (David Seville) and the creation of Alvin and the Chipmunks, entitled The Zany World of David Seville, was released.

The Zany World of David Seville — How does it feel to live with a group of chipmunks?

Here's a 'TEEN-VUE into the life of a recording dynamo who hit pay dirt with a cat called the "Witch Doctor," then came back big with a group of furry little beasts called The Chipmunks.

Host: Almost nothing ever happens to David Seville, unless of course you count the times he thinks he's a chipmunk or a songwriter named Ross Bagdasarian. It's very confusing being three people at once, especially if you're a father and have a five-year-old son who also reminds you of a chipmunk. You see, actually it's very simple. Ross Bagdasarian is a nice, talented guy who writes songs. David Seville is a nice, talented guy who records songs. And Alvin is a chipmunk. Not it all should be very clear, but somehow it isn't. Let's try it again.

All of these people are one man. You see him across the page sprawled out on the floor. He's the character you hear on wax giving ever-lovin' Alvin the old raspberry whenever Alvin steps out of line. He's also the cat who whips up Alvin's hip routines for wax and his recording name is David Seville, but his real name is Ross Bagdasarian. Now, is everybody clued in?

Meeting David Seville for the first time is quite an experience! He doesn't exactly look like a chipmunk: but, by his own words, he occasionally thinks like a chipmunk. His face is rugged and tanned and when he answers a question, it's obvious that he's about as sincere a guy as could live in Movietown. He'd make a first-rate dad for any guy or gal, even if he does bug Alvin a little too much.
Ross: According to my father, I am Alvin. When I was young I was always a kind of rebellious character who would never go along with the family kind of work which was always farming. I think Alvin's me, basically. I also think he's all kids who just won't take what is said to then as being the last word. Alvin's any child or grownup who rebels against the rules that demand 'you must start at the bottom.' Alvin doesn't believe in that. He believes that you start at the top and if you can't make it there, you go to the bottom. There's a little Alvin in all of us. There sure is a great deal in me, and in Adam, my son, age five.
Johnny: Listening to a guy like this talk makes you believe Alvin is really around somewhere. But since this can't be the straight scoop, you begin asking where and how did Alvin come to be?
Ross: Well, it was this way. In September of 1958 I decided to try for a Christmas novelty song. I thought of a melody on my way to work, and I went right to the studio and whistled it into a tape machine, so that it wouldn't be forgotten. Since I can't read or write music, I whistle into tape machines.

Then I wrote the words and decided that the singers should be animals or maybe even insects. I don't know why, but that's what I decided. I recorded the song with the half speed little voices (my own) and sang an introduction in my normal speed voice.

When I finished the first recording, the voices sounded like butterflies – or mice – or rabbits – but, most of all, they sounded like chipmunks. The brass of Liberty Records listened with me and we all agreed that something was missing.

Everybody liked the melody, so I wrote a new lyric and called the song "In a Village Park." A quartet sang – nothing! The more I listened to "In a Village Park," the more I could hear the chipmunks singing 'Christmas, Christmas time is near, time for toys and time for cheer.' So, I recorded it again, this time with no words, as an instrumental. This, too, was nowhere. I decided against doing anything further and gave up the whole project. But the project wouldn't give me up.

By the end of November, the chipmunks in my head were driving me crazy, so I decided to try it again, but this time to give the chipmunks some kind of identity I gave them names and had a conversation with them. The record was finally finished after three months and four versions.

All I can say is that I love Witch Doctors, chipmunks, and – most of all – tape machines.
Johnny: Now that we've acquainted with Alvin's birth, let's go back to his hard-hearted master, David Seville. Smilingly, he admits being a bit of a goof-off in his high school days.
Ross: In high school I was in all the plays and was singing in all of the operettas. I was a real, wild noisemaker. If my grades weren't good, and very often they weren't, the principal couldn't do too much about it because I was the lead in the play. I'd always say 'I can't do anything about my grades because I've got to spend all my time learning lines.' In this way, I bluffed my way a little.
Johnny: Recalling those meetings with the principal reminded David of something.
Ross: You know, I think the reason the kids do like Alvin is because I, as David Seville, resemble the high school principal or the teacher who says 'now you've got to do this my way' and Alvin says 'drop dead, I'll do it my own way.' And he winds up doing it much better than I had in mind in the first place. I think teens understand Alvin especially well.
Johnny: David Seville has a keen interest in anything that has to do with teenagers. He has a 12-year-old daughter who is constantly bugging him about wanting to be a teen, so in self defense he must keep up on teenage activities. About Dick Clark, Seville has deep admiration.
Ross: I respect and admire the guy. He's a very bright young man and I like the fact that whenever any of the kids appear in his show – they wear ties and they're well-mannered. I think Dick is showing the teenager that being a teen doesn't mean you go to dinner in dirty clothes. You can be a teenager and still belong to society.
Johnny: Watching American Bandstand mow and then, David thinks it's a well-adjusted program but adds.
Ross: I kind of feel sorry for those girls who dance together. I think it comes out of the sad fact that no boys have asked them to dance.
Johnny: Both Fabian and Elvis rate high on Seville's list of favorites, but when questioned about Tuesday Weld, the friend of all chipmunks was stymied.
Ross: That's sort of a day in the week to me. I don't know who she is.
Johnny: In the dark only about Tuesday, Seville shed a lot of light about a lot of important things that mean something to teenagers everywhere. He could only add one note of caution to his full-fledged praise of teenagers and it goes like this:
Ross: My daughter, who is 12, recently said to me, 'I can hardly wait. Next year I'll be a teenager.' I tried to explain to her that this isn't something special, but that it was just an age in her life. I think she has some sort of an idea that being a teenager means she can break the windows and a few dishes and everybody will bow down and say, 'that's fine honey, you're a teenager now and that makes it OK.' I told her that being a teenager is a fun part of your life, but being out of the teenage years is also fun and being a pre-teen can be fun. I think too much emphasis is placed on teenagers as such. Teens are great and they should have all the fun they can, as I did, but everyone tends to make the term teenager a label. This is wrong. Being a teenager doesn't make anyone immune to all the rules that are around. I mean good rules, not stupid ones.
Johnny: The world of David Seville might be called 'zany' by some, but after hearing him out, it's a cinch that if more adults thought along his same lines, the worlds of many teens would be a lot less 'zany' and much more fun!